Henry George Crandon (Harry)  born  Wells Somerset, 12th February 1874, the son of  William James Crandon and Ellen Howlett.  Sadly on the 19th February just one week after the birth of  Henry Ellen died,  leaving William to care for their 11 children ranging in age from 22 years to the infant Henry.  Unable to care for his large family William entrusted the  upbringing of  Henry to The Little Boys Home, South Darneth, Horton Kirby, Kent.

Upon leaving school  Henry joined other members of his family and lived for a short period in Higher Llansamlet Glamorgan, occupation listed as Haulier.

Henry' distinguished military career began in 1893 when he inlisted in "A" Squadron 18th  Princess Of Wales Own Hussars, Pte. 4080 Crandon.  He served in India 1894 - 1898 .  When the Boer uprising began Henry was stationed at Ladysmith South Africia where he took part in the siege until the town was relieved by General Buller in 1900.  After British forces  secured Pretoria on 5th June 1900 the end of the campaign was in sight although Boer commando units persisted in badgering British patrols. Pte. 4080 Crandon was  a member of one of these patrols when he gained his coveted VC.

" On the 4th July 1901, Private Crandon was reconnoitring with a companion in hostile country at Springbok Laagt, near Ermelo, East of Pretoria, when a party of about forty Boer commandoes opened fire on them at one hundred yards.  He and his companion, Private Berry, turned to report back to their unit, but Private Berry was hit in the hand and shoulder and his horse was injured as it fell to the ground.  Private Candon rode back, and with enemy bullets whizzing all around him he placed the wounded man on his own horse and led them away on foot for about a thousand yards until they were out of range.  He then returned the fire until the main body arrived to assit them. "

The Victoria Cross was presented to Henry by Lord Kitchener at Pretoria on 8th June 1902, at this time he  received a promotion to Corporal.

Upon discharge from military service Henry settled in Swinton where he was employed by Sir James Lees Knowles of Westwood Estate as a gardner.  On 13th July 1905 he was part of the Guard Of Honour when King Edward VII and Queen Alexandra visited Salford and presented before the  couple at the royal carriage when they unveiled the Boer Memorial, Oldfield Road, Salford.

Before long Henry emigrated to the USA, however immediately at the outbreak of WWI he returned  with the West Star Line Shipping Company aboard the Olympic arriving in England October 1914  and promtly enlisted in the 13th Hussars. Pte. 24092 Crandon.

Henry entered WWI on the 17th February 1915 in France, where  he was wounded in his left foot during the  2nd Battle Of Ypres on the 13th May 1915.  After a period of recuperation he served a further two years in the Balkans, Salonica, Egypt and Palestine, eventually earning his discharge in  in 1918.

Again Henry returned to Swinton where in the later part of 1918 he married  Margaret Elizabeth Garlock the daughter of  William Garlock and Margaret Ann Donald.  They had one daughter Florence Violet born in 1920.

In his subsequent years Henry enjoyed several Victoria Cross reunions, most notable being in 1920 when once again he was presented to royalty at "A Party Fit For Heroes" His Majesty's Garden Party For Recipients Of The Victoria Cross. He also attended in 1929 and 1946.

In 1948 Henry had the honour of taking the salute for the Royal British Legion Drumhead at Swinton Cenotaph.  Tragically later in the month he was involved in a road accident, he acquired two leg fractures and facial injuries which lay him in hospital for several months.

Henry Crandon VC died peacefully aged 78 on the 2nd January 1953, he was buried with full military honours at Swinton Cemetery.
Grave C/E - A/3207. 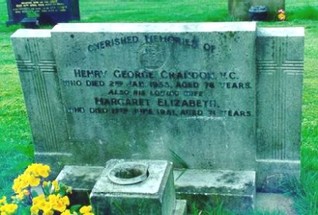